The event’s master of ceremonies Pia Turcinov then introduced the expert panel to discuss why women are the most valuable resource.

Young serial entrepreneur Bec Thompson’s latest business idea to create foldable beach tables came to her after she was left frustrated at the beach – her bag full of sand, her phone overheated and nowhere to put her coffee or sunglasses.

“I’m happy to make a mistake. You’ve heard about one idea that’s worked, but I’ve had a million that haven’t. I think once you’ve found the passion you’ll be fine,” said the Murdoch student who started her first business selling books at the age of six.

She says that while she fills a number of roles in her business, from delivery driver, social media manager and web developer, she has acquired some great mentors who offer her advice.

“Understand what your weaknesses are and then get help. Speak to people. I do wear a number of hats, but I get a lot of advice from people and I listen and I love hearing when I’m wrong,” she said.

Also on the panel was Dr Katharine Giles who has held firm on her motivation to help others, but after studying medicine, realised she could satisfy her passion working in a boardroom as well as in a hospital.

She completed her MBA and later became CEO and Managing Director of OncoRes Medical which produces images at a microscopic scale so surgeons can see if they’ve missed any of the tumour when operating on cancer patients, removing it the first time, rather than having to reoperate which happens 30 percent of the time, causing physical, psychological and economic burdens.

Katharine urged the room to remain open to ideas and to never let people tell you how you should do something.

“Every step of the journey I’ve been terrified, so don’t think because I’m sitting up here that I haven’t been scared to take every single step I’ve taken, so don’t ever let fear hold you back,” said Dr Katharine Giles.

Elizabeth Knight is the founder and director of Purposeful, an ed-tech startup with a mission to put young people in the driver’s seat of their future.

It’s an idea Elizabeth created after she graduated with one of the best ATARs in Western Australia, but found herself burnt out and unsure of the path she should take.

“I had done really well on paper but the one subject I didn’t learn in school was myself, who I was, what was my vision for the future, what were my values and what was I passionate about,

She confesses she stumbled onto the idea of entrepreneurship.

“I didn’t start off with a solution for Purposeful, I just started with this one painful problem that I was passionate about and one arguably that was hugely systemic, and a drive to find a solution,” said the TEDx presenter.

Elizabeth, who often gets asked when she’s going to get a real job, says pursuing your passion is more often than not the most secure option a young person can take.

“It’s really hard to compete with passion. If you hate what you’re doing or you’re just doing it to make money, you’re not going to be as competitive, or as creative or as innovative as somebody who is doing something because they love it and they really want to solve that problem,” she said.

Megan Del Borrello is the Founder of Behind the Brands, a values-based business designed to help female founders build profitable and sustainable organisations.

“It’s ok to be ambitious. It’s ok to want something and have a big goal. Our true goals are often the ones we’re afraid to say, ” she said.

Megan, whose background is in marketing, shared her two mantras with the group of 18 to 24 year old women.

“Everything you’ve ever wanted is on the other side of fear, and, she stood still, remembered who she was and then the game changed,” said Meghan. 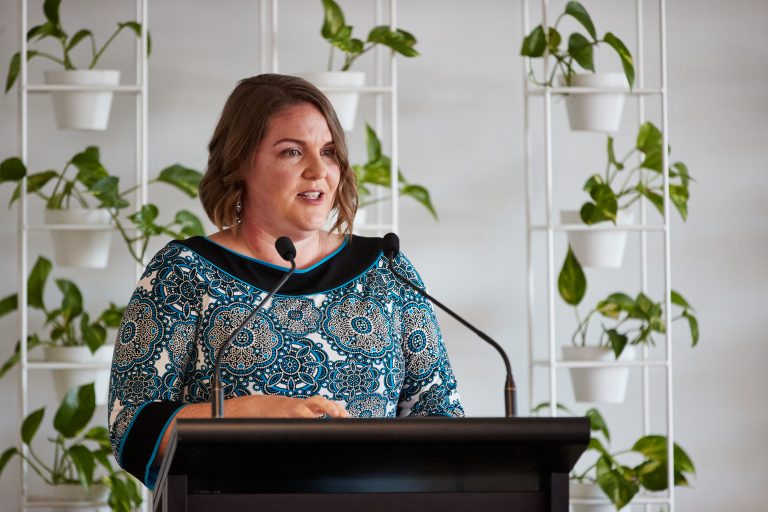 Once the group had had the chance to be inspired by some very impressive women in technology and business, it was over to them to work on their entrepreneurial ideas.