Poppy Starr Olsen is the example every young person needs to give their parents when they’re told they can’t go to the skatepark.

The pro-skater was just 11 when was invited to compete in the World Cup in the United States, an achievement which prompted her to start her own business.

“My parents weren’t in a financial position to support me and get me over there, so I had to think of a way to fund this flight,” said the now 20 year old.

The pro skateboarder from Newcastle, who had always loved to draw, began selling greeting cards at the markets while still at primary school.

“The more I started making things, the more I wanted to expand, and the more ideas I had, and that’s how it grew,” Poppy said at a live Accelerator for Enterprising Women Summit in Sydney.

She now sells her art online, making jewellery, cards, stickers and skateboard designs, whilst also training to compete at her first Olympic Games in Tokyo in July.

And rather than let the postponement of the Olympics due to the pandemic get her down, Poppy used time in lockdown to grow and build her business.

“One of the positives of COVID was that I had more time to draw because I wasn’t travelling as much. I became so excited again about working on a business and creating these prints and artworks to sell,” said the VISA sponsored athlete.

An ability to bounce back and take risks are skills that have helped Poppy both in her business and the bowl.

“When I think of failure I just remember where I am and how lucky I am and think about the fun aspects of it and realise it’s really okay to not know what you’re doing.” 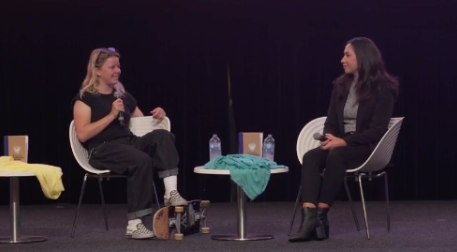